Often there is uncertainty about which way the cutting head should be placed on the bar of the circle cutter to get the right diameter.  And the distance markings on the arm often get worn away.

It is for these two reasons that I have given up trying to get the right diameter circle from the measurement markings on the arm of the circle cutter.  Instead I measure and mark out the centre point and the radius of the circle directly onto the glass.  Only a few tools and supplies are needed.

First you need to decide on the centre point, leaving at least 2cm at the edge of the piece the circle is being cut from to allow a clean circle to be broken out.

Once you have done that, mark an axis at right angles at the centre point.

Measure the radius from centre line , mark that on the line. 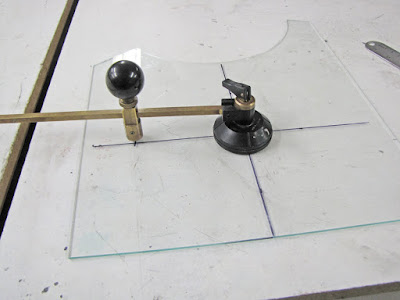 Place suction cup at the centre of the axis. In the case of the cutter I use there are four markings to assist in the centering of cutter. 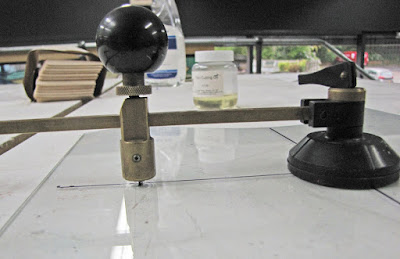 Move the cutting head along the arm until the wheel sets right on the radius mark.  I find that getting low helps a great deal in seeing the placement of the wheel. 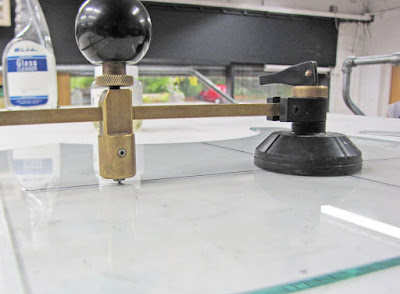 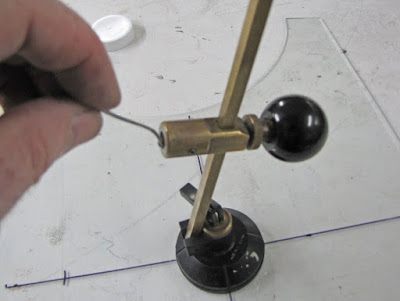 I put a drop of cutting oil on the wheel, so that in a preliminary run, I can both see where the scoring line will be and be sure everything is far enough away that the arm does not hit something on the way around. 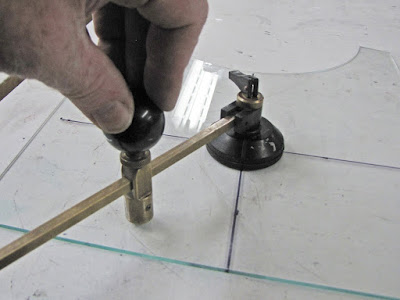 Once you have set the cutting head on the arm of the cutter, you can cut as many circles as you wish of the same size without needing to do further measurements.
Further information on breaking out the circle is given in this blog post and a more comprehensive guide to measuring and placing all sorts of sizes is given in  Drilling Glass, guide no. 7.
Posted by Stephen Richard at 07:00

A current listing of classes can be found at here.
Open studio sessions are available upon enquiry from stephen.richard43@gmail.com

Glass Tips is brought to you by Stained Glass Supplies

'Your Treasure Trove of tips and "How to do" articles are the best I have found, since they are so "no nonsense" and as "Traditional" metods that I have found. I think everyone that interested in glass work should read them."

"Nice blog. You have shared useful information. Keep up the good work! This blog is really interesting and gives good details." Vinod