There are a number of people firing stacked layers of glass in a pyramidical fashion to melt the layers down, in a nod to the 1950’s.

Annealing of a full fused platter of this nature is easier than a tack fused one. The degree of contour still in evidence will be important in determining what the annealing schedule should be. 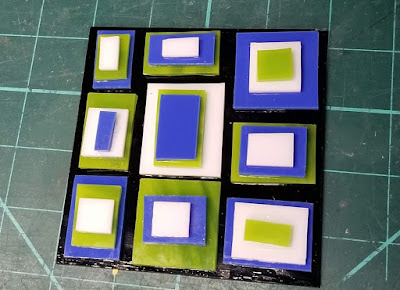 In this example shown by Vicki Urbich there are at least four layers - five if the base is two layers, although in this case there is only one.  A full fuse at 800°C will not be enough to give a flat piece for a trivet or platter.  You could extend the soak at 800°C but, it is better to go to 816°C for ten minutes rather than an extended soak at lower temperatures to avoid devitrification.

Damming
The edges of this piece will be wavy, unless dammed, because of the uneven layering.  Placing dams around will give crisp edges to the piece, even though the stacked pieces will round and spread.

Annealing stacked pieces
Anneal this set-up for at least 9mm for a full fused piece. The pieces will spread and attempt to fill the gaps between the stacks.  Even with an 816°C fuse, the pieces will not be perfectly even in thickness.  To be safer, and account for the remaining unevenness, anneal as though it were 12mm thick.  Other lay-ups will have slightly different requirements.

If it is to be tack fused, you will need to anneal considering the different thicknesses across the piece.  You will have nearly 12mm thick at the thickest and only 3mm at the thinnest.  The generally accepted recommendations are to anneal for twice the thickest part - 24mm in this case.

The anneal is more than the length of soak. It is a combination of the soak and the rate at which you cool to at least 370°C. The cooling rate is directly related to the length of the soak.  If you require twice the length of soak at the temperature equalisation soak, you will require half the speed of anneal cool.  The Bullseye Chart forAnnealing Thick Slabs will give you the relevant rates regardless of the glass you are using. The temperature points will change for other glasses, of course, but the rates remain the same.

Rate of Advance
The earlier problem this lay-up gives you is the heat up to avoid thermal shock.

The heat up of 4 layers of glass stacked on a single or even two-layer layer base is more difficult than for even layers across the whole piece. Each upper piece shades the heat from the lower ones, making for cool and hot areas next to each other.  With four layers, each layer needs to heat through to transfer its heat to the one below.  This means the bottom of the stack will take a long time to become as hot as the top layer.  Meanwhile, the uncovered glass is getting as hot as the top of the stack.  This often leads to the bottom layers breaking from the stress of the uneven heating.

Graham Stone suggests 100°C (180°F) per hour for four, even layers. As this is four uneven layers, the rate of advance should be at least half that. This should be used all the way up to the bottom of the bubble squeeze to allow all the glass to heat at the same rate. Glass generally reacts better to a slow, steady contant rate of advance in heat, than faster rates with multiple soaks.

Bubble Squeeze
The bubble squeeze for this single layer base piece can be as quick as 50°C per hour over the 50°C range.  It does not need to be slower, as the weight of the stacks pushes the air out between layers more quickly than large, even and lighter layers.  A double layer base requires a slower bubble squeeze because the weight of the stacks will push the air out to be between the two base layers.  This means a rate of 30°C or even 25°C through the range.

Then you can go faster to the top temperature.

Firing uneven layers requires extreme care on the initial heat up to avoid thermal shock.  A high fusing temperature is needed to get an even thickness across the piece.  Annealing is easier to calculate for even pieces, but must be much more cautious for tack fused items.

Posted by Stephen Richard at 07:00

A current listing of classes can be found at here.
Open studio sessions are available upon enquiry from stephen.richard43@gmail.com

Glass Tips is brought to you by Stained Glass Supplies

'Your Treasure Trove of tips and "How to do" articles are the best I have found, since they are so "no nonsense" and as "Traditional" metods that I have found. I think everyone that interested in glass work should read them."

"Nice blog. You have shared useful information. Keep up the good work! This blog is really interesting and gives good details." Vinod